skip to main | skip to sidebar

It's the election, stupid

Many are suggesting that now is not the time to cut spending. Now is not the time to raise taxes. With interest rates so low, we have a golden opportunity to rebuild our public infrastructure – increasing the debt makes sense under current circumstances. And since the economy is so fragile, any hint at fiscal austerity would have an immediate contractionary effect.

Well, of course this is true. But it misses the point. We have an election on the horizon!

Right now may not be the appropriate moment to pay for the stimulus. But we are going to have to pay for it *eventually*. The question is, who is "we"? How are "we" going to pay for it?

This is about distribution. We can cut public spending. Or we can raise taxes. (Or both.)

If, alternatively, we raise taxes, people are talking about targeting the rich. So, in this case, "we" means the very top of the income distribution. If you make less than $250,000 per year, you’re out of that group.

Now, if we try to understand the manufactured debt-ceiling crisis in terms of promoting economic growth, it makes no sense. It was bad for growth – period. But if we consider it in terms of income distribution and realize that there is a major election on the horizon in 2012, things come into focus.

Consider some data. The following figure comes from the website of Douglas Hibbs, who has proposed an intuitive "bread and peace" model of winning presidential elections. In this figure, we just have "bread" – i.e., economic growth - across the x-axis. It’s the average rate of growth during a 4-year presidential term – weighted so that the last few months before the election count far more than the previous time period. Along the y-axis, we have the incumbent party’s share of the vote (that is, the share out of the votes cast for the 2 major parties).

The relationship is clear: more growth, more votes for the incumbent party.

The "peace" part of the model is captured by the data-points marked in red, where military fatalities were high, so that incumbent parties lost despite solid economic growth. One thing is clear – if economic growth is low when an election approaches, the incumbent party loses.

So, how do things look for President Obama? Not so good. Here is a picture according to the latest prediction from Hibbs’s model. Note that in this figure, the x-axis combines weighted economic growth with military fatalities. The red point is the prediction for Obama: 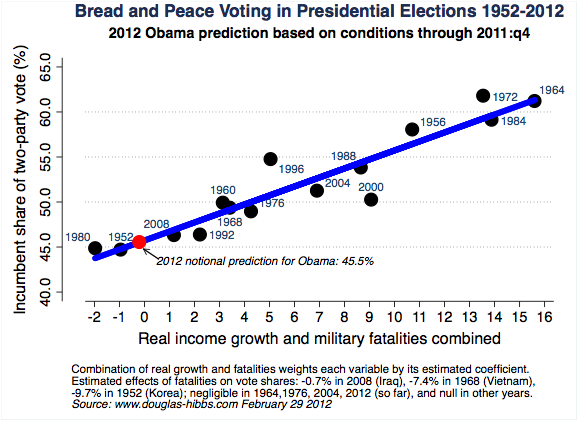 If this looks bad for the President, you can be sure that the debt ceiling crisis made things worse. Not only did it contribute to volatile losses in the stock market, it also signaled to the world that the US stimulus is over. If you put through such contractionary policies... voilà, you’ll get a contraction. According to the "bread and peace" model, this will contribute to the Democrats losing the White House.

If you are rich, you face a trade-off. Either your income contracts because your tax rate goes up or due to the manufactured negative shock to growth. If the economy picks up towards the end of Obama’s term, he has a good chance of getting reelected. This means that when it’s time to pay for the stimulus, the Democrats will be in a strong position to raise taxes on the rich. If we can manage to keep growth low for the next year, however, then the Republicans will take over the White House, and taxes on the rich will remain low.

When you think of it this way, the manufactured crisis not only makes sense, it was brilliant. We trade low growth, for low taxes. This is a great trade for us. We may not know where the global economy is going, but we know that raising taxes cuts our incomes. Of course, by "us," I mean the rich.

For more on how governments can take advantage of manufactured economic crises to push through policies that are bad for growth and exacerbate income inequality, see my book: Vreeland, James Raymond. 2003. The IMF and Economic Development. New York: Cambridge University Press. (This book has also been endorsed by the American Medical Association as a non-narcotic alternative sleep-aid. Just read 2 pages. Zzzzz...)

Posted by James Vreeland at 9:33 AM 5 comments:

Imagined Lines Are Not Imaginary

I was traveling last week, so I didn't get a chance to re-post the following. It's something I've been talking a lot about on FB, and I put something together quickly when asked by Joshua Tucker (NYU) and John Sides (George Washington). It's always a privilege to be featured on their blog, The Monkey Cage, which they co-author along with Erik Voeten (Georgetown), Andrew Gelman (Columbia), and Henry Farrell (George Washington). So here is the original Monkey Cage post from 6 Aug 2011, and here is the text:

IMAGINED LINES ARE NOT IMAGINARY

If we had raised the debt limit with no fanfare, like usual, it would have had no effect – it’s just an arbitrary line.

But if you treat it like a line in the sand, drawing the attention of the world to our unsustainable fiscal situation, and then you fail to cut much spending or raise taxes, you send a powerful coordinating signal to the global herd: It’s time to run.

See, our twin deficits – fiscal and current account – are sustainable only as long as people believe they are. But if people stop believing, then they will start to run from the dollar and from US bonds. If that happens, you don’t want to be the last one left at the party.

Now, we all know that US imbalances are unsustainable. The only question is just how far they can be pushed, and what exactly triggers them to come back towards balance. I have been hoping that they might someday be addressed by China addressing their exchange rate as their economy develops. For a long time, China has benefited from a weak exchange rate against the dollar, as the United States is the main destination of their powerful export sector. But there is another pressure on the rise: competition for scarce resources. At some point, the Chinese government will see that the marginal benefit for the export sector from a weak exchange rate has met the marginal benefit from a strong exchange rate for cheaper oil.

If this day had come before the current mess, then we might have had nice market forces addressing US imbalances – and it would have been a slow and steady soft landing. With the revaluation of the renminbi, US consumers would be able to afford fewer exports from China, and the Chinese would buy more from the United States. A market solution would be nice because domestic politics on both sides of the border were not going to address this. Certainly not the “non-tax and spend” Congress. Our government simply lacked the political will to do what was necessary.

But, dammit, the last thing you want to do is to call attention to the lack of political will! Changing the debt ceiling issue into a global focal point forced Congress to finally put up or shut up. They failed to put up. The way you address a fiscal deficit is to cut spending and raise taxes. Every country that has been subject to IMF austerity knows this all too well. In their arrogance, (some members of) Congress believed the United States is above this logic. Now we’re heading for no man’s land. We have announced to the global herd in a focused manner that the United States lacks the political will to address its deficit. Sadly, this is going to hurt global economic transactions, which many people believe contribute to a more peaceful world. The foolishness of making the debt ceiling a focal point – especially with what is going on in Europe – cannot be underestimated. Hard times are ahead.

James Vreeland
Washington, DC, United States
I'm James Raymond Vreeland, a political scientist at Georgetown University in the Edmund A. Walsh School of Foreign Service and the Department of Government. I do research in the field of international political economy. I post about my ongoing research as well as current events. Thank you for visiting my blog!